Pearls are a wonder of nature. They are formed inside of the soft tissue of a living mollusk that deposits calcium carbonate layers concentrically over and over again. The prefect pearl is completely round, smooth and lustrous. They do come in other shapes, known as baroque pearls. Almost all species of mollusks are capable of producing pearls, but these others have less shine and spherical shape. Pearls have been highly prized for centuries in many cultures. Both natural & cultured gem-quality pearls are nacreous and iridescent.

The value of a pearl varies. There is no standardized grading system for pearl quality, but there are a number of factors that help determine the value: pearl type, rarity, size, shape, color, nacre quality and luster, and weight (for natural pearls) or size (for cultured pearls).  You can learn more about the different kinds of pearls here in our pearl guide.  And while it’s not exactly a pearl price guide per se, it should give you some idea of what to expect in terms of value.

Wild pearls or natural pearls occur spontaneously in the wild, but are extremely rare and valuable. Hundreds of pearl oysters have to be opened, and therefore killed, to find even one wild pearl. This was how pearls were found for centuries. Today these naturally occurring pearls are almost extinct and not commonly used in the jewelry market. The jewelry industry has turned to cultured pearls, which do not harm the oyster like found with rare natural pearls! 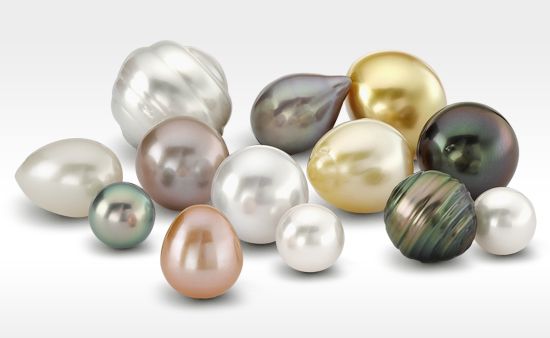 Cultured or farmed pearls from pearl oysters and freshwater mussels make up the majority of pearls sold.  They come in two types, Saltwater & Freshwater. To create a pearl, a tiny piece of mantle tissue from a donor shell is put into the host shell, and sometimes a bead nucleus is added. This causes a pearl sac to form where the calcium carbonate is distributed.

South Sea pearls are prized for their luster & size. Their colors can be white, silver, pink, gold, cream or a combination of these with overtones that are the same as the oyster shell itself. Akoya pearls are grown from small oysters. They are known to be nearly identical in size, shape, color and quality. All of these pearls types can only be grown with one pearl in an oyster at a time.

Freshwater pearls were originally started in Japan, but since then China has become the world’s largest producer. Freshwater pearls are generally irregular in shape but new farming and pearl-enhancement technology produce more round pearls in a new array of colors. Freshwater, non-beaded, cultured pearls can be implanted up to 25 at a time in a single mussel. These completely saturate the market.

Edisons are nucleated like saltwater pearls, with a mother of pearl bead inserted in the gonad of the mollusk. Sometimes two beads are placed there.

And it is not necessarily a big bead, either! Edisons can be nucleated with different sized mother of pearl beads. I have heard 5mm and I have heard 8mm. So, lets’s say the nucleus can be anywhere between 5mm and 8mm in size.

And the pearls are BIG!! So, even if they are nucleated with a larger bead, the nacre on that bead is thick! These pearls range in size between 11mm and 14mm and some pearls can get up to 17mm.

They are a nearly round to round shape and the luster is very high, bordering on metallic. They come in a range of natural colors. The white is beautiful because it rivals a South Sea Pearl in its largeness and whiteness but they can also come in natural colors of lavender, pink, champagne.

The colors are really luscious and again, you can really see the metallic look to them. In terms of their creation, the actual grafting process has received three national patents so it truly is a new way of creating pearls!

And it takes a while for them to form which I believe is why it has taken them a while to catch on in the marketplace. You are looking at about three years of growth in the mollusk before they are harvested. They are stunning!

They are beginning to take the industry by storm by providing South Sea pearl sizes at Freshwater pearl prices!

Round– Perfectly round pearls are the rarest and most valuable shape.

Semi-round– used for necklaces or in pieces where the pearl can be disguised to look more rounded.

Button– used in pendants or earrings where the flat back can be covered and it looks like a rounder larger pearl.

Drop– often used in pendants, earrings or as the focal point of a necklace.

Pear– also often used in pendants, earrings or as the focal point of a necklace.

Oval– once again, often used in pendants, earrings or as the focal point of a necklace.

Baroque– valued for their unique and fascinating shapes.

Ringed or Circled– have a concentric ridges along the middle of the pearl. 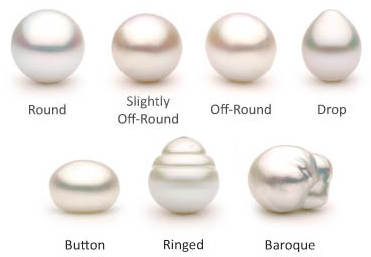 White and black pearls are the most popular, but there are also silver, gold & pink. Pearls also have tints or undertones that can make it have a glow. For example, a pearl can look white but when studied and light is reflected off of it, it can give off a hue of pink, green or blue. Black pearls are rarely black, they can be shades of green, purple, blue, grey, silver or peacock. The very best pearls have a metallic mirror-like luster. 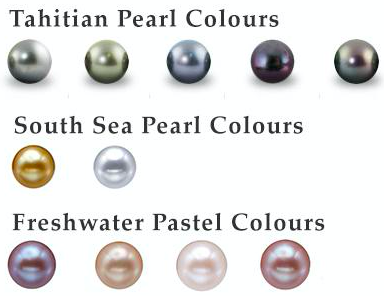 Nature is not normally flawless and as a mollusk creates a pearl where often, the layers of the nacre do not get applied evenly. This causes bumps that can appear in the pearl surface. When judging the complexion (the trade uses terms such as ‘blemish’, ‘spotting’, and ‘cleanliness’), remember that pearls are made by live oysters in a natural environment. There are many uncontrollable effects that create the surface. The most valued pearls are smooth and come with a higher price tag.

The way to tell the difference between real and fake pearls is by judging the surface and evaluating how textured it is. Real pearls will have a slightly uneven, rough surface. It is a trick to rub your teeth lightly over the surface to be able to feel the texture. Faux pearls are made from glass or plastic and are totally smooth. Real pearls also vary in size, color and luster and don’t look uniform. 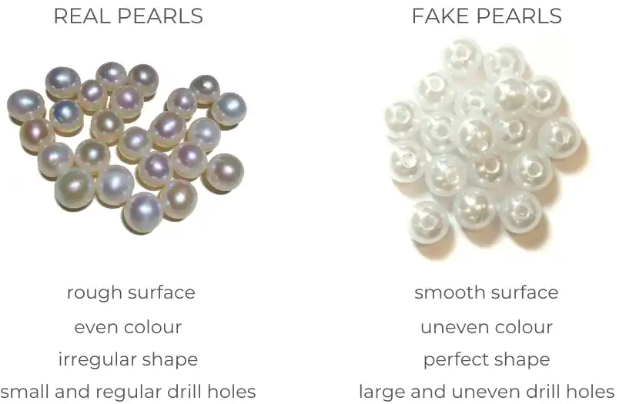 You should be gentle on your pearls since they are naturally soft. Try not to get lotions, hairspray and perfumes on pearls because this can deteriorate the luster. Wipe them down before putting them away in a soft cloth bag, not plastic.

If you wear your pearls often we recommend getting your strand restrung every 5 years. Are you finding fraying knots and stretched out strands? Come in for a pearl necklace repair. 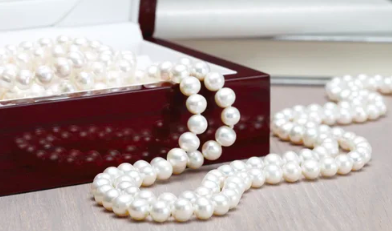 At Kilauea Fine Jewelry we source only the highest quality natural South Sea and Tahitian pearls! We Never use dyed pearls in our fine jewelry collections!

We use a A-AAA grading scale